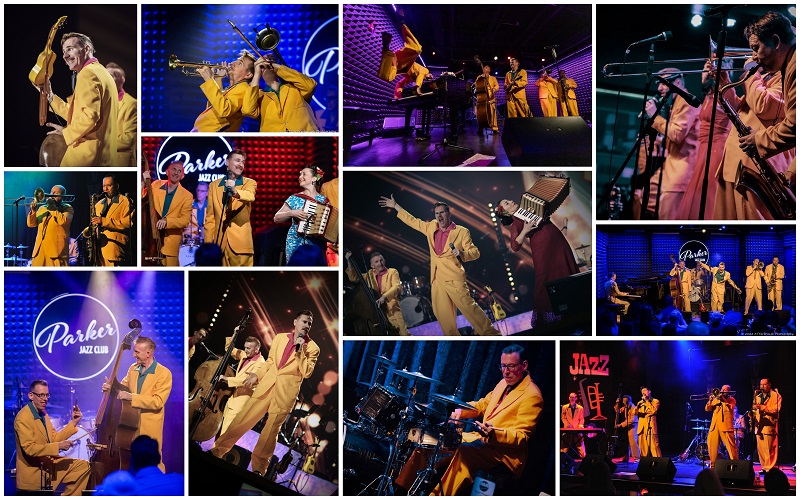 Britain’s Got Talent stars, The Jive Aces, are the UK’s No.1 Jive & Swing band. Renowned for their high energy Jump Jive and swing music and spectacular stage show, the band’s repertoire stretches from the timeless tunes of the swing era to the glitz of the Rat Pack, with a dash of rhythm & blues, swing and jazz.

They feature songs made famous by such greats as Louis Prima, Cab Calloway, Benny Goodman, Bobby Darin, Louis Armstrong, Sammy Davis Jr. and Ella Fitzgerald – along with a selection of superb originals taken from their albums. An incredibly in demand sextet, they have worked with John Travolta, Van Morrison, The Proclaimers, Keely Smith, Hayley Westenra and most recently played for Her Majesty The Queen. The Jive Aces headlined (and sold-out) the first ever swing dance at the Royal Albert Hall and have bought the house down with their high energy stage show at thousands of festivals, theatres, dancehalls and top events throughout Britain, Europe, USA and beyond, over 30 countries in all. Major events include: Montreux Jazz Festival, Glastonbury Festival, Berkeley Square Ball, Ryder Cup, Cannes Film Festival, Cork Jazz Festival, Grand Order of Water Rats Annual Ball and The London Season. They are also the official band of the London Season. They have also made hundreds of TV and radio appearances including, recently, a residency on BBC Radio London and TV appearances on “Louis Spence’s Showbusiness”, “Come Dine With Me” and “Good Morning Los Angeles”.

In 2012 the band were semi-finalists on “Britain’s Got Talent”, performing show- stopping versions of Jungle Book favorites “I Wanna Be Like You” and “Bare Necessities” wowing BGT judges Simon Cowell, David Walliams and Alesha Dixon, who said “You are so joyful to watch, every single one of you. That was world class”. Their music video, “Bring Me Sunshine”, has become a viral hit with nearly 2-million views on YouTube and received 7 film festival awards including the prestigious “Silver Telly Award”